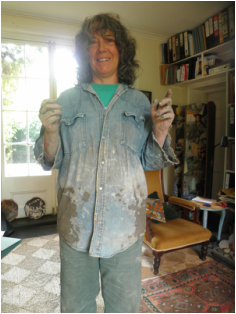 The work on the website is set out in three sections of earlier work -- Fairy Tales & Other Stories, Whiter than Snow, Defend You from Seasons such as These -- and my current work on Places of Shelter.

​These themes are the subject of ceramic pieces and also some drawings. 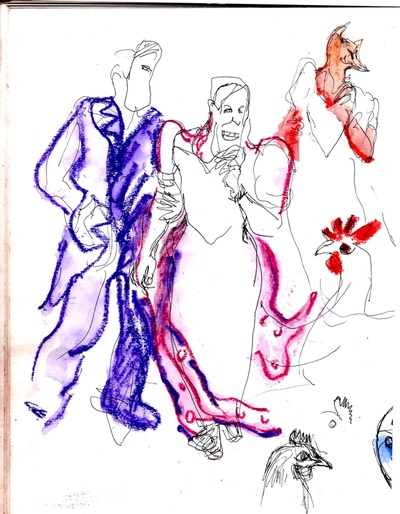 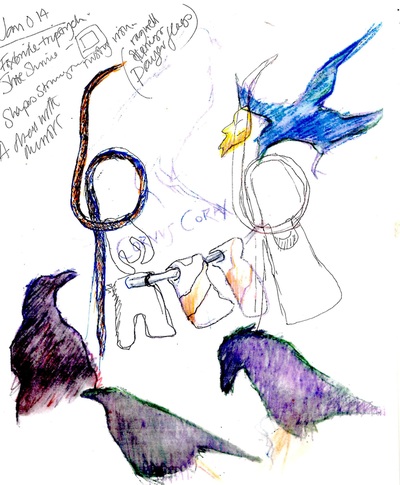 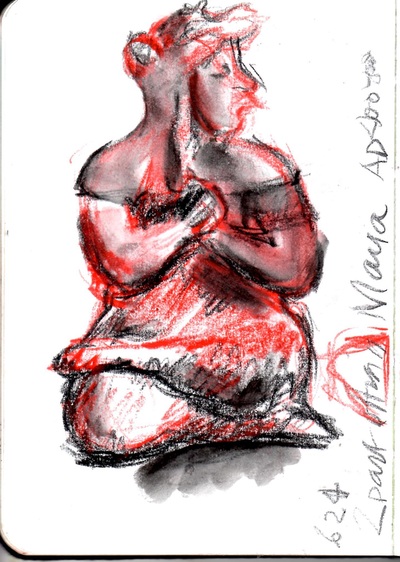 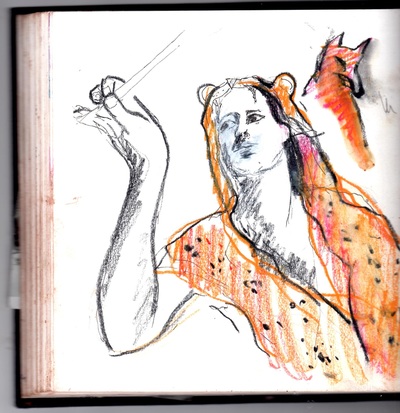 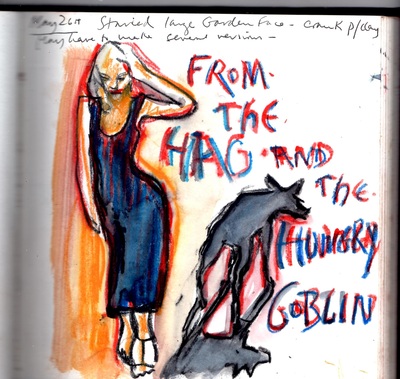 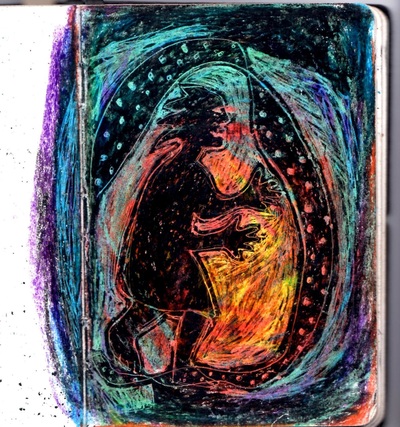 Fairy Tales & Other Stories
Many stories -- of refugees from injustice and unreason, of victims of circumstance, of homeless wanderers like Tom of Bedlam, of siblings lost and found, retribution, reward, redress -- are echoed and repeated in endless variation in folk tales and fairy stories from around the world. The longing for a child (Rapunzel, Snow White, and others), daughters misunderstood and banished (King Lear, Cap O’ Rushes), wicked stepmothers too many to mention. These are the stories that found their way onto my ceramics; certain phrases also -- Mirror, Mirror -- Extraordinary Rendition -- Asymmetrical Warfare -- Who Is the Fairest? -- Futility Music -- Make Clean Our Hearts Within Us 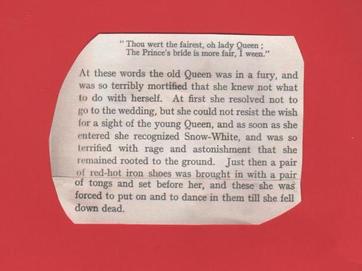 And then I remembered the Japanese legends of fox-women, spirits called Kitsune, benign or malicious, who take on human form and marry and have children till their secret is discovered. Sometimes it’s their foxy shadow that gives them away, sometimes the tip of their tail.

The Fairytale section also contains themes that are echoed in the 'Whiter than Snow' section – the transformative power of clothes – Cinderella, Cap O’Rushes – the punitive role of shoes – Snow White, The Red Shoes.

Whiter than snow, whiter than snow
Wash me and I shall be
Whiter than snow
And last, a friend told me that when her mother died, her aunt said she should take her mother’s shoes and throw them into the water. What kind of water? She didn’t say. I imagined the shoes like small boats setting off in the current. And that reminded me of the ballad ‘Mary Hamilton’ with the lady-in-waiting disposing of her unwanted child:

Which takes me back to Magdalen Laundries and the myths of the Berry. 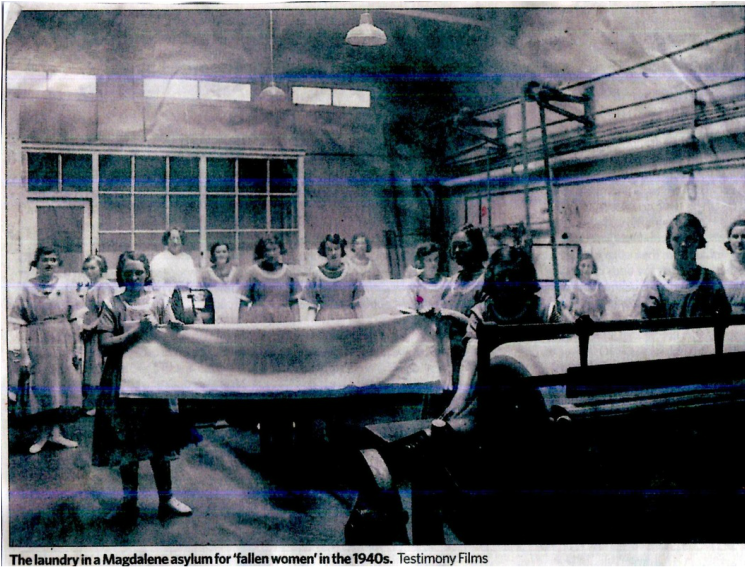 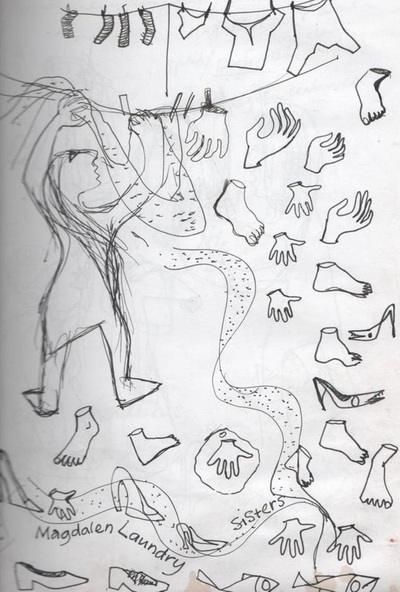 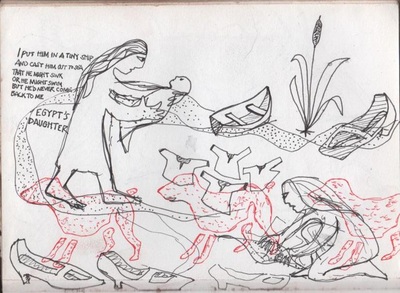 In the classic fairytales, the reward for a girl is marriage to a prince. Retribution for her vanity and wickedness often involves shoes – they dance her to death, or force her to cut off her toes to fit them, or dance in red-hot iron shoes.
In real life, shoes are a powerful, though sometimes painful and damaging, statement of sexuality and conformity. 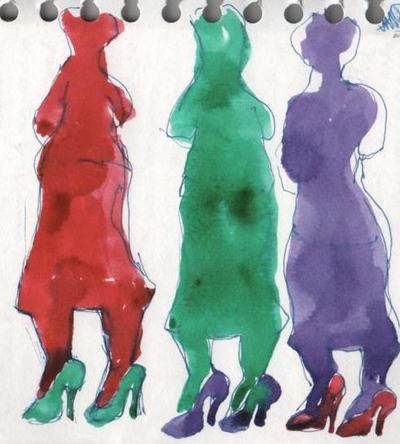 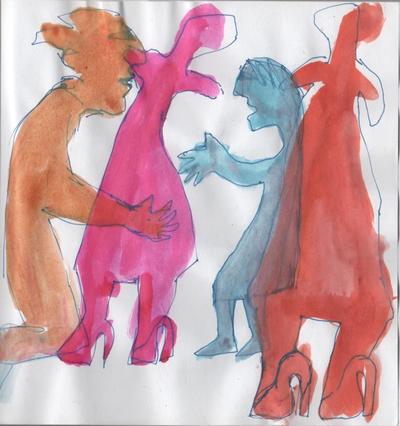 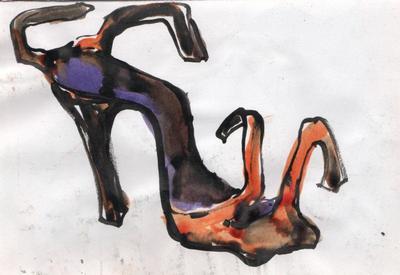 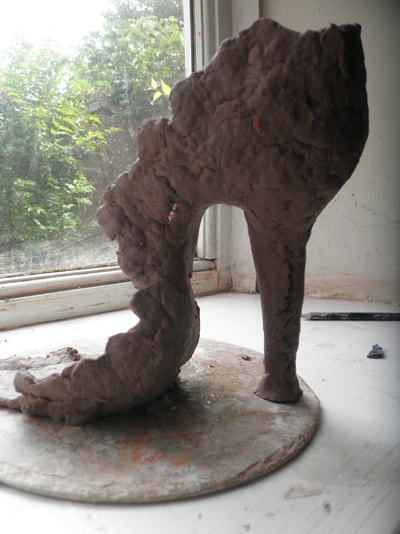 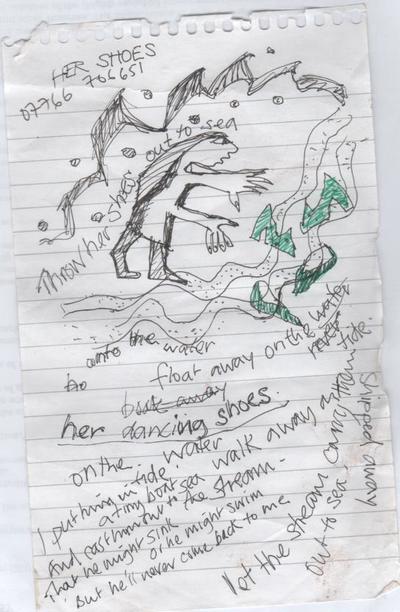 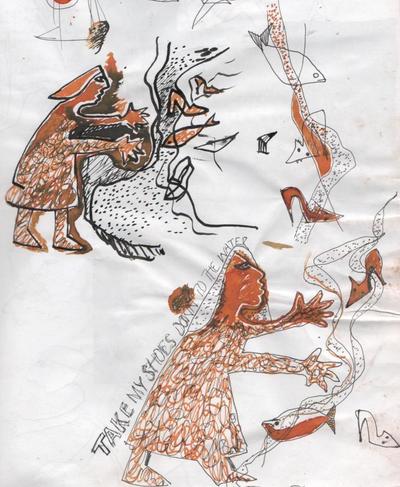 Defend You from Seasons such as These

Poor naked wretches, where so e’er you are
That bide the pelting of this pitiless storm,
How shall your houseless heads and unfed sides,
Your looped and windowed raggedness defend you
From seasons such as these? [King Lear]

​I started making garments, coats or dresses, empty as though the wearer was there but invisible. I often thought of the wearers as wanderers, escaping from danger.

As in Tom O’Bedlam’s Song:
From the hag and hungry goblin
That into rags would rend ye,
The spirits that stand by the naked man
In the Book of Moons defend ye
That of your five sound senses
You never be forsaken
Nor wander from yourselves, with Tom
Abroad to beg your bacon.
While I do sing ‘Any food any feeding...’

Tom, a homeless wanderer, reappears in the storm scene of King Lear:
Poor naked wretches, where so e’er you are
That bide the pelting of this pitiless storm,
How shall your houseless heads and unfed sides,
Your looped and windowed raggedness defend you
From seasons such as these?

Some of the figures, built from elements of discarded rubbish (Any Food? Tom O’Bedlam’s Shirt) have lines from the ballad and Lear imprinted into the clay. 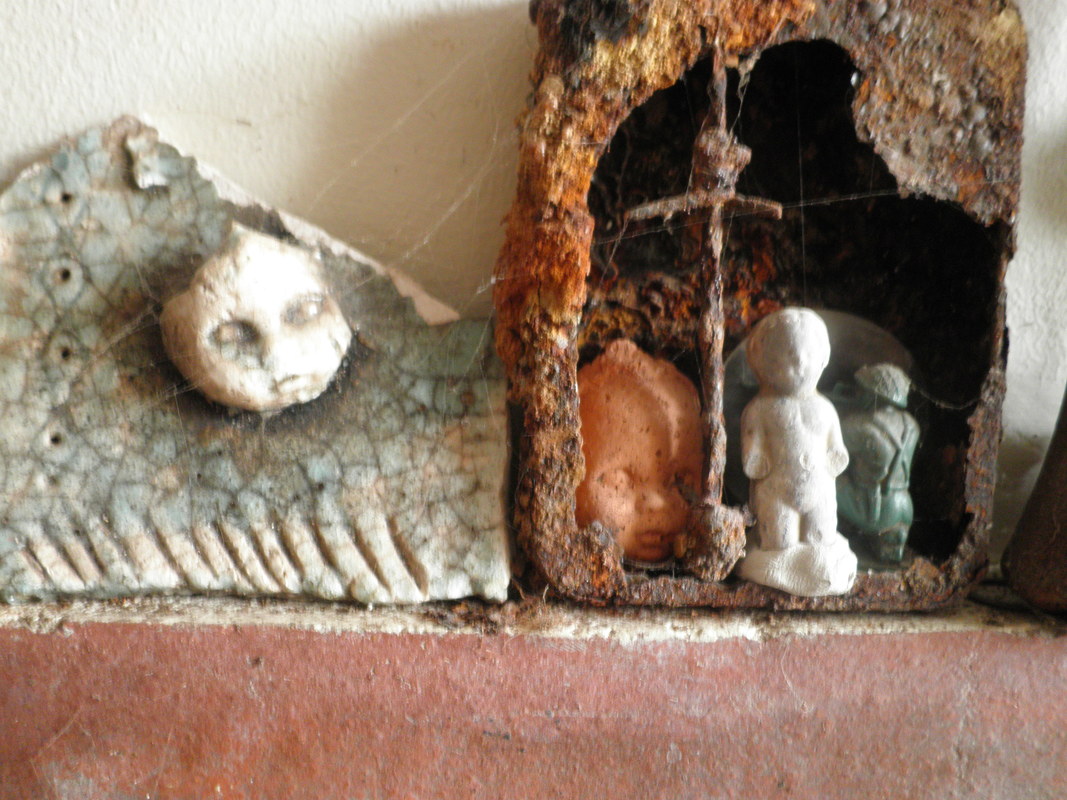 When I began to use the surface of clay for drawing on, it was always figures, mostly human, that appeared  - at first drawn from observation of people seen in the street or at jazz clubs – some of the figures became monstrous, like the Greek Harpies, half-bird, half-woman, wearing outrageous shoes and threatening  innocent child victims.

Later, Amy Winehouse  and themes more political – including Ian Tomlinson, who died at the G20 Summit in 2009. 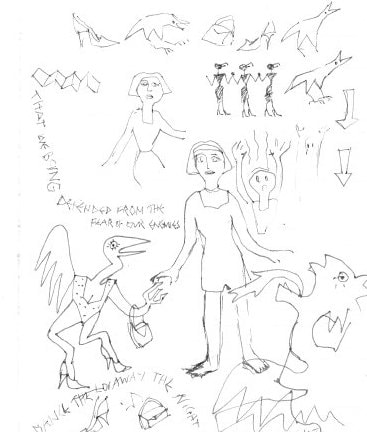 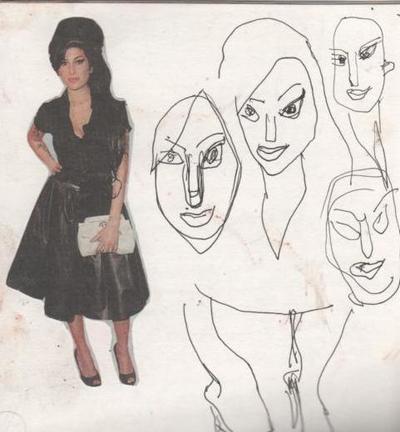 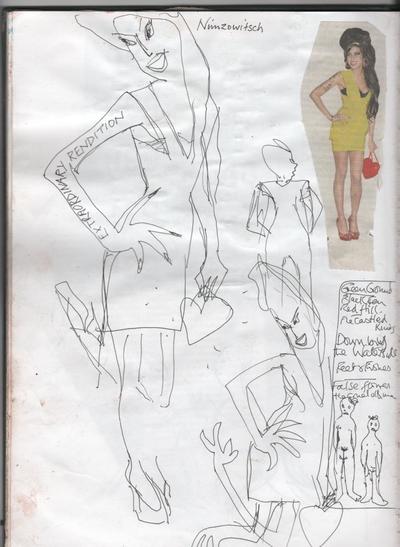 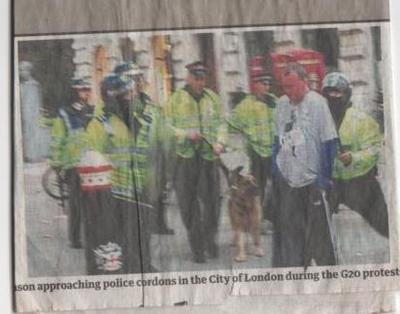 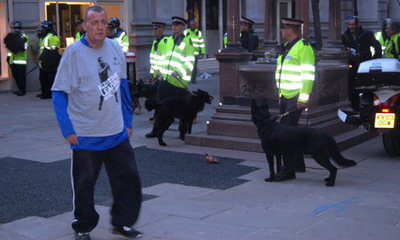 The garments, had narratives, in words and drawings,  on their outer surface but later they began to acquire the attributes of buildings – stairways, windows and doorways.

My increasing preoccupation with the partly visible inner structures of places of shelter - decayed or damaged, like exposed living quarters - led to the garments becoming more complex structures built from small units like rooms and clad with strips of torn clay; see Current Work: Places of Shelter.